From the second you hear the creative, Phish inspired, Revolushn, you know that you are about to hear something unique and strangely awesome. Hailing from San Francisco, Revolushn clearly respects his own artistic vision, and doesn’t play to the status quo when creating his songs, which is great when you enjoy bands such as The Sex Pistols or the Ramones.

Releasing his new album titled The Freshman, Revolushn will, no doubt, gain a lot of respect for his daring tongue-in-cheek attitude, along with his entertaining music.

Opening with his fast paced, punk infused, and instantly catchy track titled “Suck It Up”. The song is pretty much what you would come to expect from a song given such a title. Opening with a true punk guitar riff, a basic drum kit, and just enough rock machismo to pull it all off, “Suck It Up” is a welcome song to pair with your bad mood.

“Dark Matter” follows the punky “Suck It Up”, and although it doesn’t bring the same sort of energy, it does show us that Revolushn isn’t afraid to try something completely new and a little strange. Adding some female vocals at the end only add to the haunting and dreamlike state of the song. The song itself is a bit of a bland journey in comparison to the in-your-face message that the previous track brought to the table, but still, “Dark Matter” is well worth the time put in.

The third track off The Freshman is very David Bowie-esque, and it doesn’t even try to hide its 80’s electronica sound either. For many this will be a fun song to listen to, while others might find this track a bit too dated to take too seriously.

Moving on throughout the album we come across a few more musical gems like “Scarlett” and “KC”, with every track being a new, and many times, bizarre musical journey.

Revolushn is one musician who will eternally have polarizing opinions about his music. For many this will be an artist who fits very well between PHISH and Weird Al Yankovic, and for others this won’t have any place in their more reserved collection of music.

If you are daring enough, musically ambitious enough, then take a listen to what Revolushn has to offer and pick up a copy of The Freshman. 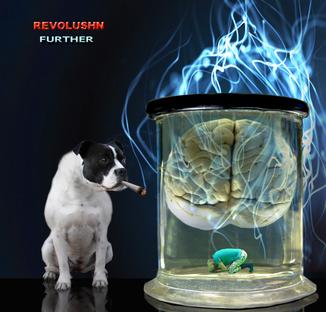 Interview with REVOLUSHN guitarist NO for Radio Manilla:

Can you tell me about the name of the band? You want to revolutionize to concept of revolution?

Question to NO, what lead you to this formation? It’s surely not your first take on music?

I had quit making music. Then I met Bobby Killer Bee and he started taking me to jam sessions. Once I started playing again that was it. Then I met Aaron, Norita, Jimmy Leggs, etc. etc. It just took off from there.

Would you say that Revolushn is somewhat typical music for KC?

Not at all. We stick out like a sore thumb. We like the KC sound and scene but are kind of outsiders when it comes to the music.

How do you like the current way the music industry is headed?

Well, the industry has always screwed the artist and I don’t think anything has changed there. There are some music industry types that are complaining about the current state of affairs but we say SUCK IT UP!

Do you have a main theme you always get back to in your songs? What’s the message you mainly want to deliver?

Life is hopeless. HA HA. No, we have many different massages and people all interpret them differently. Our main message or theme is have fun while you can.

Why do you think so many people wanted to tag along the project (12 people)?

Well, I hope because they like the songs and they get a  chance to express themselves in that context. Also, the band is make up of very nice people (except for NO) and they all wanted to be part of it.

A question that’s probably interesting for many, who’s the astronaut and how did you actually work with him? That’s some real “Space Oddity” right there :)

Some of us were playing at a Mars convention and we met Chris Hadfield. He jammed with us and we asked him to be in the band. He said sure. Haven’t seen him since but he still keeps up with what we are doing.  your paragraph here.

Reviews for THE FRESHMANpe your paragraph here. 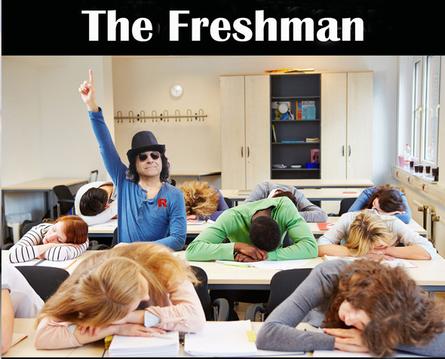 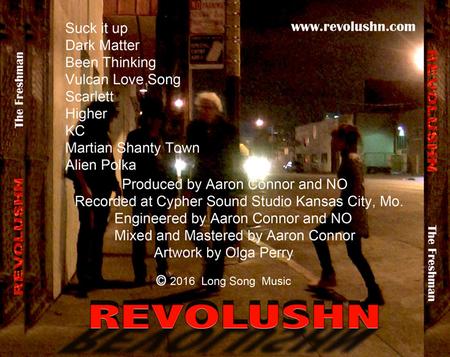 2/7/2016: The Revolushn began when NO (songwriting/vocals/guitar) met Aaron Connor (producer, bass guitar) in a Kansas City studio in 2012. Aaron, with several gold and platinum records under his belt was impressed with NO’s songwriting and studio skills. Bobby Killer Bee (guitar, vocals), who owed the studio, offered NO studio time to record some new songs. NO brought in some of his friends including David Kendrick (DEVO, SPARKS), Wayne Coyne (FLAMING LIPS), Jimmy Leggs, D-Blues and Michael Angelo Batio. Revolushn was born. The sessions turned into a gig in Kansas City. The video from that show featured the song KC. KC quickly became popular in Kansas City and generated over 50,000 YouTube hits. The song attracted the attention of the owner of the Kansas City Royals. Over the next two years the sessions continued and the result is Revolushn’s first album THE FRESHMAN. As the music of Revolushn evolved more members were added. The band currently lists 12 active musicians, two lawyers, a filmmaker and an astronaut. During the first two years Revolushn released 6 videos featuring some of the songs on The Freshman.

The indie sound of the group is a natural component of the bands songwriting. The lyrics can be heart felt (That’s My Girl), personal (Been Thinking) or irreverent (Suck it up). The material on THE FRESHMAN is mostly up-tempo. Songs like Suck it up and KC blast out of the speakers and establish a powerful rock tone that is consistent with the bands live show. The songs Dark Matter and Been Thinking show the bands arrangement skills and musicianship. While over 30 songs were recorded for THE FRESHMAN, the LP has just nine songs. The result the album that has a consistent feel and sound.

While Revolushn is based in San Francisco, California, the 12 active members are spread evenly across the country with members on the east coast (Buzzwell in NYC), the mid-west (Bobby Killer Bee, Aaron the Head, Eddiespaghetti, Jimmy Leggs, Norita), and the west coast with DEKAY, SCHUBERT, NO, EMC, Doyle and D-Blues. The band works both virtually and in real time. The shows are amazingly tight and focused. The rumor has it that several members of Revolushn were involved in a mysterious Music on Mars experiment for NASA. The band says that is how they learned how to stay connected musically and collaborate while in remote locations (like on a space ship).

I heard about these guys from the club and just happened in on their first show and WOW, it was just great. NO (guitar, vocals) was fun to watch and both he and Bobby Killer Bee kicked it into high gear with their great guitar playing. The bass player, Eddiespaghetti and the drummer (DEKAY) seemed to be breathing together. If this was really their first show, well, I just hope they stay together for a long time.


1.) What made you want to get into the music business in the first place? Did anyone influence you to do music? If so, who? Influences? Role Models?

2.) Unfortunately the music industry is full of talented individuals who just don’t get any recognition for their talent and/or work. What do you plan to do to make sure you stand out and get noticed?

Independent. Seen too much of big label BS to want to bother with them. Also, we want our music to be our idea so whether it succeeds or fails we can learn what WE did wrong or right.

4.) Do you think that the traditional music industry model as we know it is dead? Why or why not?

It may not be dead but it is wounded. It is healthy that it has changed and those that are in it for the right reasons will do just as well with the new model.

5.) How do you think the internet and social media affected the music industry and how musicians are able to market themselves?

Are you kidding?! It changed everything. Now our videos compete with Madonna, U2 or Taylor Swift. The playing field has been leveled. We may not play arenas but our music is just as accessible as those big stars.

6.) What is the most difficult thing you’ve had to endure in life and has that had any effect on your path to becoming a musician?

My parents didn’t want me to be a musician.7.) Artists who try to make music for the general public and make more money are usually seen as “sell-outs.” Do you see it that way and if so, what do plan to do to make sure you make music that is true to your brand and make a good living at the same time without having to “sell out”?
We have been selling for years but no one seems to want to buy. Besides, we don’t care how much money we make. We do this just because. And we will be heard!

8.) When you do music, what would you like your listeners to get out of your music? We hope it makes them happy, or sad if that is want they like. It is different for everyone so all we hope is that it makes them feel something. But we prefer happy.
Follow Revolushn